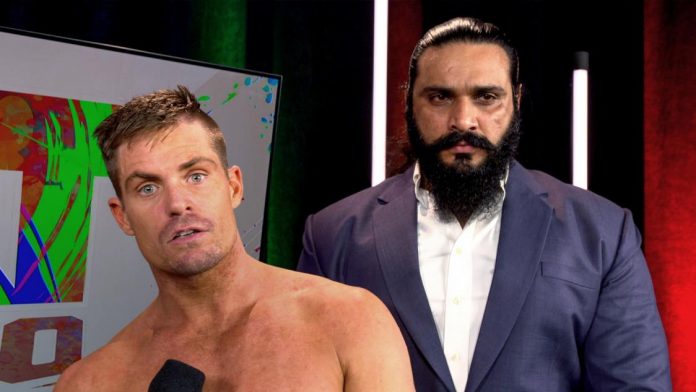 Last night’s NXT show opened up with LA Knight calling Waller to the ring for a fight. This came after last week’s show ended with AJ Styles defeating Waller in the main event, then bringing back Knight to get payback on Waller for some of his recent actions. Waller presented Knight with a restraining order, and threatened to have him arrested if he came within 50 feet. Knight then brought out Dexter Lumis, who also wanted a piece of payback from Waller.

Knight offered Waller two options – lift the restraining order and deal with him, or get choked out by Lumis. NXT went to a commercial break but came back to Lumis vs. Waller in singles action. During the match, Waller sent Lumis to the barrier after a brawl at ringside. Waller then returned to the ring to distract the referee, which allowed a large mystery man to attack Lumis at ringside, sending him into the ring post face-first. The big man rolled Lumis back into the ring, allowing Waller to deliver his Stunner finisher for the pin to win.

The segment ended with Waller posing with his new bodyguard, showing him off, but the man was never named by Waller or identified on commentary.

The man behind the bodyguard role is none other than Saurav Gurjar.

You may remember Saurav from the Indus Sher tag team in NXT. Saurav began teaming with Veer Mahaan at NXT live events in September 2018, and were managed by Robert Stone and Malcolm Bivens at times. Saurav and Veer debuted on NXT TV by attacking Riddle in March 2020, but the team was disbanded later that summer and Veer was brought to the main roster. Veer and Saurav later teamed with Drew McIntyre for a six-man win over Jinder Mahal and The Singh Brothers at WWE Superstar Spectacle in January 2021.

Saurav actually returned to action at the WWE 205 Live tapings held on January 11, in a match against Odyssey Jones. The bout never aired on TV as Jones suffered an injury and had to be helped to the back.

As seen in the post-show video below, McKenzie Mitchell talked with Waller about the match and how he won it with the help from the mystery man.

“You mean my insurance policy? Yeah, see, LA Knight thinks he’s smart but he’s American public school-educated, so he ain’t as smart as me! Yeah, just like you,” Waller said to Mitchell. “So, I knew LA Knight would have a plan up his sleeve, he always does. Well, Grayson Waller had a plan, too. It’s a pretty big plan, too. See, Dexter Lumis, I’ve been waiting weeks to finally beat you and I hope your wife saw exactly what I just did, but now, with my insurance policy here, NXT has even more opportunities to feel The Grayson Waller Effect.”

Saurav, who is also an actor and National Kickboxing Gold Medalist in India, signed with WWE in January 2018. Before signing with WWE he worked for TNA’s Ring Ka King brand in India, billed as Deadly Danda at the December 2011 tapings. Saurav was a member of the RDX heel stable with leader Jeff Jarrett, Abyss, Nick Aldis, Sonjay Dutt and Scott Steiner.

There’s no word on what Saurav’s new name will be now that he’s aligned himself with Waller, but we will keep you updated.

Wait a second, who is this!?