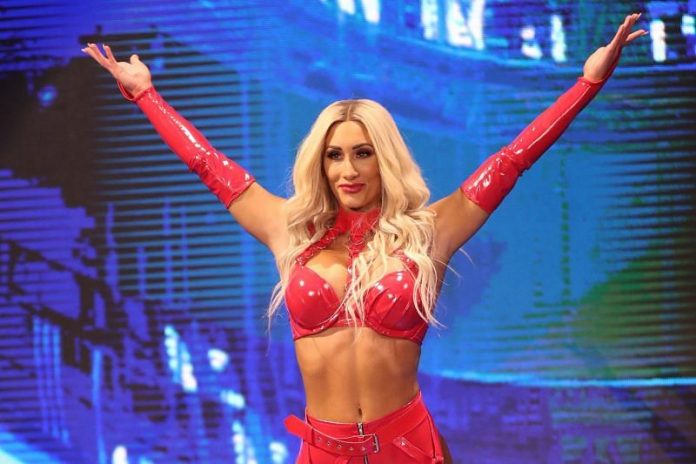 WWE Women’s Tag Team Champion Carmella recently tested positive for COVID-19. Carmella revealed the diagnosis during a recent episode of her “That Thing We Do” podcast with fiancé Corey Graves. She revealed how she got sick around two weeks ago.

“You guys, I got the ‘vid. I did, I got it, got me. I got COVID. I got-got about what? A week-and-a-half ago? No, two weeks ago now. Yeah, I woke up super just not feeling well, just really tired, run down and took some tests and I tested positive and then I mean, it was like a cold. It was kind of like a little bit worse than a cold. I was down and out for like three or four days just not really doing much. But, on the up and up, feeling better now. However, my lovely fiancé over here was just bragging and bragging and bragging about his immune system and how amazing he is and it’s not gonna get him because it’s true, he had to test because he was around me.”

Carmella has missed some WWE TV time as of late, and has only wrestled one match in 2022 so far – when she and Vega retained over Nikki A.S.H. on the January 3 RAW. She was back on TV this past Monday night with Vega, but did not wrestle.

Why Brock Lesnar vs. AJ Styles Did Not Close WWE Survivor Series 2017